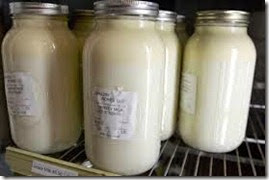 The swing in momentum can, in part, be attributed to a transformation of the argument that advocates are using. The debate used to be centered on the health and nutritional benefits of raw milk versus the safety of pasteurized milk, but the likes of Ron Paul — who mentioned the issue in several speeches during his 2012 presidential run and introduced similar bills when he was in Congress — have turned it into one about freedom of choice.

When Dr. Paul would travel the country speaking at college campuses about personal freedom, he would often frame it in an argument about food freedom, and freedom of choice — raw milk provided the perfect example of Nanny State regulators who outlaw choice in the name of “keeping us safe.”

Despite the growing grassroots movement in favor of loosening raw milk regulation and bipartisan support, getting a bill through Congress will continue to be an uphill battle, especially with strong opposition from the dairy industry. The National Milk Producers Federation and International Dairy Foods Association — usually on opposite sides of dairy policy — have repeatedly compared consuming raw milk to “playing Russian roulette.”

Chris Galen, spokesman for NMPF, said his group will be educating members of Congress on the risks associated with raw milk to deter Massie’s bills from gaining traction.

Freedom comes with a certain amount of risk. If you wanted to live a risk free life, then a benevolent dictatorship might be your preferred form of government. But, as Thomas Jefferson wrote,  ”I would rather be exposed to the inconveniencies [sic] attending too much liberty than to those attending too small a degree of it.”

On his Facebook page, Rep. Massie at least had a sense of humor about the opposition to his bills from Big Milk, posting “The lactose lobby can be so intolerant! It’s time to legalize freedom.”

We’re glad to see Rep. Massie is in line with a great American political tradition that places personal freedom over the desire for the Nanny State to keep us safe from ourselves. This sort of strong opposition, this early, from Big Milk is actually a good sign that they’re worried about the number of original cosponsors this legislation has and the potential for momentum to swing in our direction.

Please contact your representative and tell them to legalize freedom by urging them to cosponsor H.R. 4307 & H.R. 4308!

ARTICLE FROM CAMPAIGN FOR LIBERTY